General Information on the Lionfish 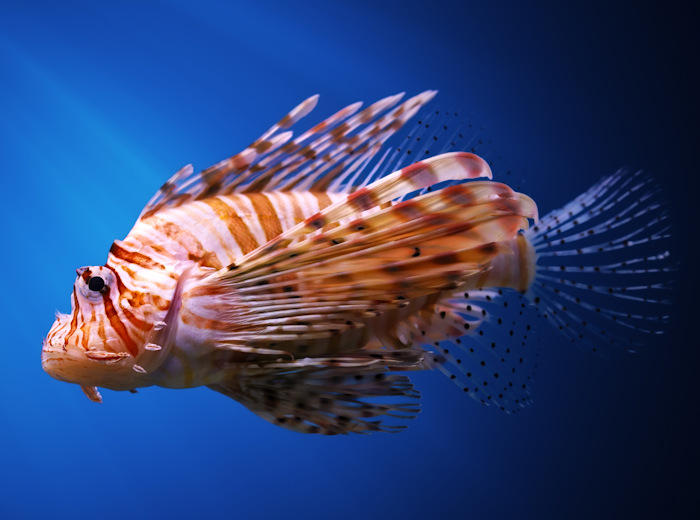 There are several different types of lionfish as they belong to a number of poisonous marine fish of the Scorpaenidae family. Some of the informal names for family members include scorpionfish, firefish, dragonfish, turkeyfish, and stingfish.

Lionfish have a vividly striped body with flamboyant long pectoral fins, and are native to the Indian Pacific oceanic region that extends from western Australia and Malaysia east to french Polynesia and the Pitcairn Islands. In addition, the range extends north to southern Japan and southern Korea, and south to parts of coastal Australia. Lionfish have also recently been discovered off the coast of Cozumel, Jamaica, Dominican Republic, Belize, Roatan, Puerto Rico, and Cuba with reported sitings as of 2010. Due to their relatively recent introduction, lionfish have been spotted in the warmer coral regions of the eastern Atlantic Ocean, around the Azores, and extending into the Mediterranean Sea, the Red Sea, and the Caribbean Sea.

NOAA researchers have determined that lionfish reach sexual maturity within two years and spawn multiple times during each spawning season producing up to 30,000 eggs. They are believed to spend the winter from North Carolina to the Bahamas with juveniles found as far north as Rhode Island during the summer months. The largest species can grow up to 15 inches long, although an average length is about 1 foot. An adult lionfish can weigh up to 2.6 lbs. While many can be seen out in the open, just as many will hide under ledges and in small underwater caves. Divers hunting for lobster are highly at risk of being stung by the lionfish as they hide in the same typical locations as lobster. Their lifespan in the wild is around 15 years.

According to USGS, recent genetic work has revealed that the Atlantic population of lionfish are comprised primarily of Pterois volitans (red lionfish) with a smaller number of Pterois miles (devil firefish). The red lionfish have greatly elongated dorsal-fin spines, and the membranes of all fins are often spotted. The body is white or cream coloured with red to reddish-brown vertical stripes. The vertical stripes alternate from wide to very thin with the thin stripes being more numerous and sometimes merge along the flank to form a V-shape. 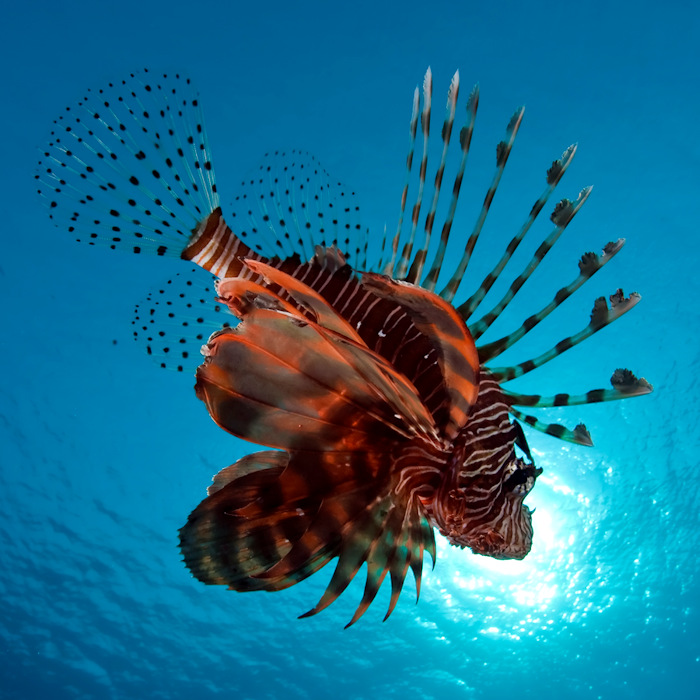 Nothing embodies both the beauty and danger of the ocean more than the lionfish. Not only are they beautiful with their long gracefully flowing fins and dramatic colors, but they come fully equipped with venomous spines capable of delivering painful stings upon any unwary swimmer or diver.

The Pterois volitans, or more commonly known today as red lionfish, have been around since the time of Carolus Linnaeus, a Swedish botanist, physician, and zoologist who laid the foundation for binomial nomenclature. This modern scientific system for naming plants and animals are composed of two Latin names with the first indicating the genus and the second indicating the species.

Pterois is a genus of venomous marine fish found mostly in the Indo-Pacific. Their fins give the appearance of a lion’s mane, hence the name lionfish. The shape and coloring of their body provide them with the ability to blend in with their surroundings.

Pterois andover:
This new species of scorpionfish is from primarily the Western Pacific, Indonesia and Papua New Guinea. They are also found in the East Indian region, Sabah, and the Philippines. They inhabit on or near turbid inshore reefs surrounded by soft sand-mud bottoms, often in the proximity of freshwater discharge.

This new species superficially resembles Pterois volitans (red lionfish), a sympatric widespread Pacific species, but differs in having larger body scales (81 and 18-25 respectively) and usually 13 versus 14 pectoral-fin rays. The two species are readily distinguished underwater on the basis of dorsal fin morphology, particularly the shape and color of the spine membranes. Pterois andover possesses a narrow membrane posteriorly on each spine, which is more or less uniform brown and terminates in an exaggerated pennant-like structure. In contrast, the membranes of P. volitans are broader, boldly striped, and usually lack a well differentiated terminal pennant. The new species also has consistently fewer and fainter spots on the caudal, soft-dorsal, and soft-anal fins except for the population of P. volitans from western Australia. 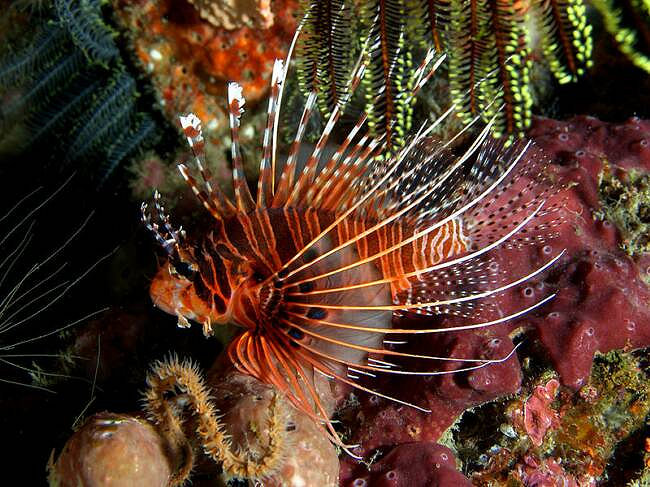 Pterois antennata:
The spotfin lionfish is also known as the ragged-finned firefish, banded lionfish, or broadbarred firefish and have red, white, and black vertical stripes along their body. The have large, fan-like pectoral fins with tall quill-like dorsal fins. The spotfin lionfish species is found in the tropical Indian Ocean and western Pacific, it can grow to a maximum of 20 centimetres (or 8 inches) and packs a venomous sting. Its typical habitat is lagoons and reefs where it hides during the day and hunts shrimp and crab during the night.

The antennata lionfish are beautifully marked with alternating vertical bands of reds, whites, and browns, and are readily identified by their pectoral fins which possess webbing that connects only halfway up the fin ray. This membranous area has one or more dark spots resembling eyespots. The posterior portion of each fin ray is whitish and extends to past the caudal peduncle on the ventral portion of the pectoral fin; each fin ray is independent and not connected by webbing. There are no readily identifiable sexual markings on these fish.

Pterois lunulata:
The luna lionfish have quite a few common names including dragon’s beard fish, japanese lionfish, and poisson scorpion. They are from the Indo-Pacific region from Mauritius to southern Japan. They can be found on rocky substrates in subtropical waters, or at open substrates with remote outcrops of reef or soft-bottom substrates at moderate depths. They feed on fish and crustaceans.

The luna lionfish have 13 pectoral rays and are sometimes confused with Pterois russellii (or Russell’s Lionfish). The median fish are almost clear, but become spotted in large adults. It is best identified by the pale-centered scales on the principal dark bands on the body forming a net-like pattern and V-like markings across the pectoral fin rays.

Studies of the Pterois miles (devil firefish) may provide us with some indication as to the natural history of Pterois volitans (red lionfish). In the Gulf of Aqaba, Red Sea, the piscivorous cornetfish (Fistularia commersoni) appears to be a predator of the devil firefish. A published note concludes that cornetfish in the Red Sea may utilize their ambush tactics to seize lionfish safely from the rear, consuming them tail first.

Pterois mombasae:
The frillfin turkeyfish is also known as african lionfish, and deepwater firefish. They are found in the tropical Indian Ocean and the Western Pacific, it grows to a maximum size of 20 cm. Typically found in soft-bottomed areas of the ocean, often in conjunction with invertebrate growth (i.e. sponges).

Pterois radiata:
The clearfin lionfish, also known as the tailbar lionfish, radiata lionfish, whitefin lionfish, or radial firefish, is a carnivorous ray-finned fish with venomous spines that live in the Indian and western Pacific oceans. They are similar looking to their cousin the Pterois antennata. They are the only lionfish species with blank spines, but they can also be recognized by the pair of horizontal white stripes on its tail. They prefer to spend time in caves, overhangs, and other shady spots. This species will eat smaller fishes, ornamental shrimps and crabs.

This is a generally uncommon species that inhabits lagoons and seaward reefs. They pefer rocky reefs and seem to avoid stony corals. They are coastal and sometimes are found in surge zones or in narrow crevices or along rock-walls in small caves. They can also be found under ledges during the day.

Pterois sphex:
The common name for Pterois sphex is Hawaiian Turkeyfish. It Inhabits lagoons and seaward reefs, and generally stays hidden beneath ledges or caves during the day. It is a nocturnal feeder on crustaceans.

The red lionfish has greatly elongated dorsal-fin spines. The membranes of all fins are often spotted. The body is white or cream coloured red to reddish-brown vertical stripes. The vertical stripes alternate from wide to very thin (with the thin stripes being more numerous) and sometimes merge along the flank to form a V-shape.

Recent genetic work has revealed that the Atlantic population of lionfish is comprised primarily of red lionfish with a smaller number of devil firefish. Red lionfish inhabit lagoons and seaward reefs from turbid inshore areas to depths of 50 meters. They hide in unexposed places at daytime often with head down and practically immobile. They hunt small fishes, shrimps, and crabs at night, using their widespread pectorals trapping prey into a corner, stunning it and then swallowing it in one sweep. Published records of natural predators of the adult red lionfish are unknown.

The body of most Pterois are dominated by the colors maroon or brown with white stripes along the body and fins. Most scorpionfish are colored to camouflage them against their background, however, the lionfish are a notable exception with their greatly extended fins and striking coloration. The fish of the genus Pterois have a pair of fan-shaped pectoral fins and a spiky first dorsal fin. The dorsal, anal and pelvic fin spines are highly venomous, unlike the pectoral and caudal fins which contain no spines. The ‘Fin Locator’ drawing below will give you an ideal of the location of these fins and venomous spines. 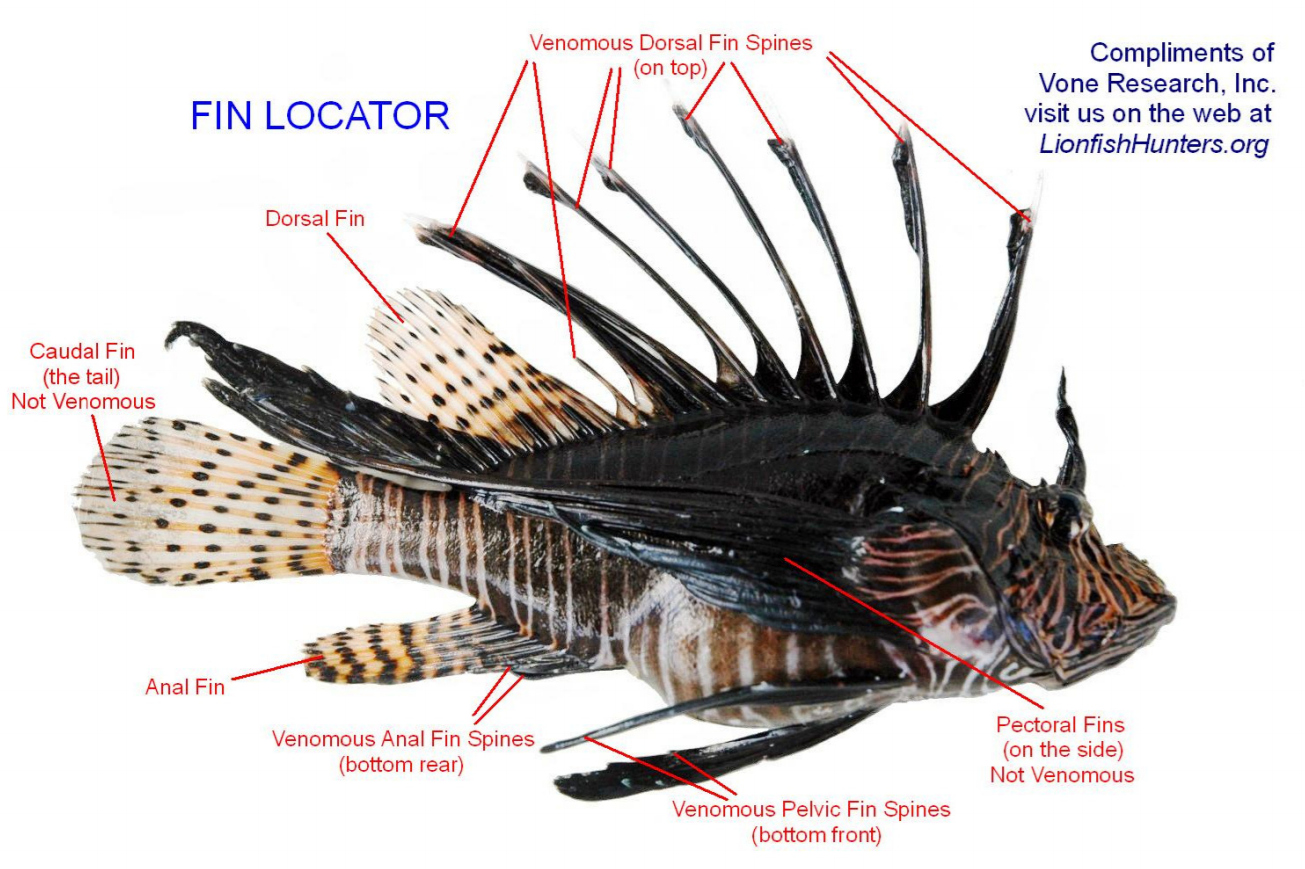 Lionfish inhabit coral reef from about 30 to 165 feet deep. As juveniles lionfish live in small groups, but as adults they typically live alone. Lionfish are a nocturnal species which moves into deeper water at night to forage. The prey of lionfish include smaller coral reef fish and crustaceans, which are swept up and trapped with the extended pectoral fins. Their body is about 1.5 times the length of their head with fleshy tentacles above their eyes and below their mouth. They have cycloid scales that are oval or elliptical in shape with a smooth edge. The anterior part of each scale is usually overlapped by the posterior portion of the scale in front of it which gives it a greater flexibility than fish with other types of scales.

A venom gland is located at the base of each spine. After the spine punctures the skin, the venom enters the wound by traveling up a groove in the spine. Lionfish spines are not like hypodermic syringes or pit viper fangs. Instead, a loose integumentary sheath (skin) covers each spine and during envenomation, the sheath is pushed down the spine, causing compression of two venom glands located at the base. The neurotoxic venom then travels from the glands through depressions (grooves) in the wall of the spine and into the puncture wound. There have been at least four toxins identified: an antigenic heat-labile protein which is the primary toxin; acetylcholine (pronunciation: ah-see-toe-coe’-lean) which is a neurotransmitter; a neuromuscular toxin; and a low molecular weight non-proteinaceous ichthyotoxin. There is evidence that commercially available stonefish anti-venom has detoxifying effects on lionfish venom. 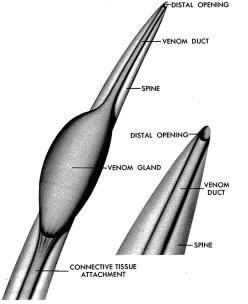 The teeth of the red lionfish are numerous, but very tiny. They are placed on the upper and lower jaws in densely packed bilateral clusters and in a small patch on the anterior roof of the mouth. Functionally, these teeth appear to be limited to grasping prey after being captured by their quick predatory strike. They usually swallow their prey whole.

In the U.S., the lionfish have rapidly increased in population from the first reports as little as five years ago. Lionfish may now be as abundant as many native grouper species in the Atlantic Ocean. Although it was first thought the species’ northward expansion along the Atlantic coast of the U.S. would be limited by cooler water temperatures, however lionfish have been observed in water as cold as 56 degrees fahrenheit off the southern coast of Long Island, New York.